Get TED Now!
and save energy

After a brutally hot summer and equally brutal electric  bills, I decided to take a closer look into what our household consumption was and where most of it was being used. It’s going to take me a while to piece everything together and as we head towards fall the temperatures will decline so I may not learn anything at all. What I do know is this, we had 3 extra family members here over the last year, 2 of which were children. We also had some lingering issues with our HVAC system. Since then, the family members have moved back home and the HVAC was replaced with a more energy efficient model. This in itself may have initiated our drop in energy consumption, but we’ll see how it goes.

home energy monitoring system.  As of this writing I only have about 4 full days of monitoring data. Our electric meter was having display issues so I had it changed out a couple of days ago so now I should be able to see if this TED-5000 is reasonably close to what our meter is reading.

I’m still in the data gathering phase but there are a few things I have noticed right off the bat:

These are somewhat rough estimates but they are based on our current utility rate per KWH which is $0.1143.

I’m hoping that in the next month or so I’ll be able to acquire some good averages but in order to get the most of this system it will take years of monitoring to have really good comparisons.  Changes I make now will be reflected immediately though which is what I like about this system. The dashboard says it all.  Here is a screen shot of what the dashboard is showing me right now: 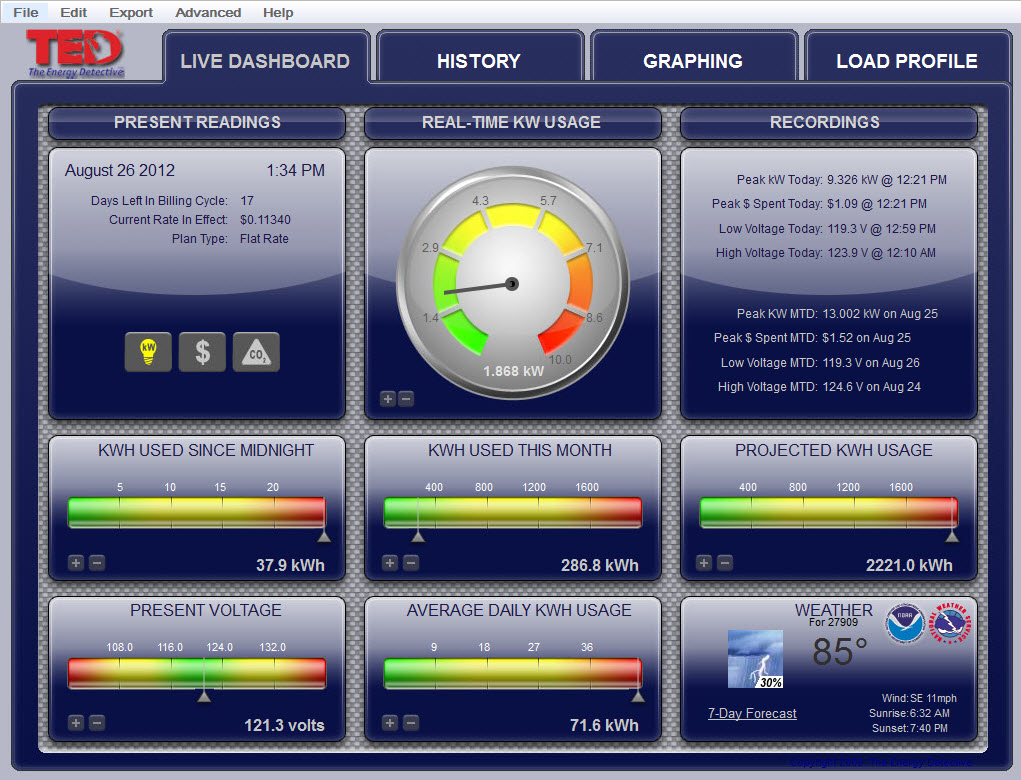 You can see I am currently using about 1.86KWH which isn’t bad, but then again, there are no major appliances currently running either. I have 2 refrigerators and a freezer as well as the pool pump running at the moment but the compressors don’t sound like they’re currently running.

If you look at the top right, you can see we peaked at 13kw yesterday when everything was running at the same time!  Either way, you’ll learn to appreciate turning things off very quickly after monitoring how much usage you’ll be accumulating over time!

So in the 6 months that have passed since my last update a lot has gone on. I have accumulated 6 months worth of data. I have found and dealt with a few noise/interference issues with the TED Gateway, and the charging circuit in the handheld display crapped out on me. Even with all of this, I have still found this to be one heck of a home energy monitoring solution!

The TED forums leave a lot to be desired but you can find some helpful info in there if you dig deep enough. I started there after my first month of monitoring my home power usage and noticed that what TED was telling was not matching up with what my meter was telling me. From the forums I found out that there is a statistical page built into the Footprints program that actually lets you watch what is going on with the communication between the MTU and the Gateway in real time. Instead of footprints.html, the page is called stats.htm.

Here you can see that I have highlighted the 2 items of interest from the stats page, MTU Rec and MTU Skp. This is pretty much a packet counter of how many packets the gateway has received or skipped. The goal here is to get the MTU Skip number as low as you possibly can.  The receive number increments so naturally you want to see it increasing every time the browser refreshes.

From what I read in the TED forums, if you have more than 20% of your total MTU Rec as skips then you have interference issues. In the example above I would be at .005%.  I would need to have just over 4000 skips to be considered in the 20% range. I was never seeing skips this high. I was seeing skips in the range of about 2% consistently and yet TED and my power meter could never agree on anything.

I kept an eye on this page constantly and noticed that I was mostly Skip free all day and night until around 2AM. Almost like clockwork every morning at 2AM I would take in huge bursts of Skips. It was driving me crazy trying to figure out what exactly was going on at 2AM that could be causing this. I stayed up to try to figure it out but couldn’t find anything kicking on at that time of the morning but then it dawned on me….

My power company uses what is known as PLC, or Power Line Communications to talk to the meter every morning to get a reading from the meter and make sure it is still functioning properly. Well apparently this signal is strong enough to interfere with my communication link between the MTU in my breaker panel and the line going to my Gateway. I needed something to isolate the circuit from the outside world and keep the power company from hosing up my readings.

So I decided to try out some inline noise filters. TED was out of the filters that they usually sell so I opted for the XPF 20A Wired-in Noise filter found on Ebay here 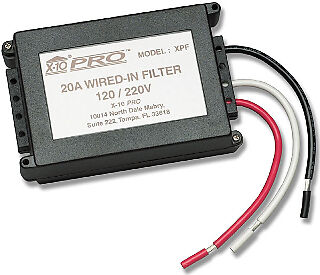 I installed this little guy in my breaker panel and voila! The interference from the power company disappeared, my MTU Skips dropped down to what you see above on my stats page which is about 1 or 2 a day!  To save time in the future I also picked up a few X10 plug in filters in case anything in the room tries to cause interference in the future.

Now on to the digital display issue:

There are a lot of rants about the digital display that comes with the TED5000C. They’re mostly about the range and the battery. The range of the display is somewhat OK for smaller homes or apartments but you may have problems in larger homes. It’s just not very good.

The battery has to be charged up for 8 hours to obtain 2 hours of use, not very efficient at all. My display was only 3 months old when it started showing signs of failure. I would take it out of the charger and after about 15 minutes the screen would display a message telling me to put it back in the charger. I was never able to get it to work for 2 hours. A couple of weeks ago I pulled it out of the charger to walk down the hall and check out the consumption of a couple of things in our Master Bedroom.  When I first pulled it out of the charger it had 3 bars of battery. A few seconds later it had 2. A few seconds after that it showed me the message saying I needed to put it back in the charger again. Then it died. All of this happened in about 45 seconds and not the 2 hours you are supposed to get out of this thing.

I e-mailed TED’s tech support and explained everything to them and they sent me an RMA the same day. I shipped the display out on January 7th 2013. They received it on the 9th and sent me an e-mail letting me know, which was nice.  On the 10th I received an e-mail from their technician letting me know that he worked on it and he found that the charging circuit in the display had failed and he was going to send me a replacement.  On the 11th they shipped out the new display. On the 15th I received it and set it up. So far so good! I don’t think that they could have made the turn around any easier! They may have perfected this process because of all of the display issues I have read about but I am going to give them the benefit of the doubt!

TED as a Troubleshooter:

Monitoring how much power we are using stemmed from a wave of high electric bills but has turned into so much more for me. I check my footprints page daily and use a Firefox plug-in so that I can always keep my eye on what is being consumed. The good thing about that is you get a feel for how much power you use on average and should something go awry, it stands out like a sore thumb!

Over the past couple of days I noticed that our usage almost doubled per day. I expected an increase as the night time temperatures decreased but it got a little crazy. We have been averaging about 55KWh per day and when I saw 111Kwh I freaked out and began to investigate. Through the graphing feature of the footprints software, I could see when the Heat Pump was kicking in. It was drawing about 10KW of power each time instead of the normal 4 to 5KW.  That sounded like the heat strips were coming on and they shouldn’t have been as it was only 44 degrees at night, but wait, they were coming on during the day also??  Something happened between my Honeywell thermostat and my Trane heatpump that was causing Auxiliary Heat to come on all the time instead of regular heat. I power cycled both the Trane and the Thermostat and everything went back to normal levels. The graph below shows what it looked like in the graph. Luckily we are still in the beginning of our billing cycle so I am only going to pay a few extra dollars for this mishap but it could have gotten really ugly if I wouldn’t have caught it as early as I did. Without the Ted system, I may not have even caught it!

I put the AVG line in there to show what we have been using prior to the Auxiliary Heat kicking in and you can see it was around 55.7KWh. You can also see where it jumped to 97KWh on the 18th and 111KWh on the 19th! The dollar values are what those 2 days are going to cost me based on 11.43 cents per KWh. So this would have been bad if I had not caught it since our billing cycle doesn’t end until around the middle of February. I would definitely say that this TED system has already paid for itself in the last 6 months of using it!