I’m still doing this repair for those who may need it. Here are the specifics.

I charge a flat fee of $35 which includes the new mic cord, the replacing of the cord, and return shipping back to you. This is for those residing in the US only. Paypal, Cash, or Check are accepted as payment.

I also run an Ebay auction listing for this service but the price on there is $45. The reasoning behind this is because Ebay charges a final listing fee of 10%on the service and another 10% on what I would be charging for shipping and then Paypal charges an extra 3% on how much I am paid through them so you get the comfort of knowing you can trust the legitimacy of the transaction but it comes with a price.

I have done 37 of the microphones for people and I’ll be the first to tell you that I haven’t ran off with anyone’s microphone yet! 🙂 As a matter of fact, I actually ended up buying one of them back from a gentleman who decided to sell his radio and microphone.

Either way you would like for the transaction to take place is fine with me. Just hit the Contact Me link above and let me know.

***I’ve recently found some free time and have had a few inquiries about doing this repair for others so I set up a single price auction on Ebay offering this service as a repair. Basically You send me the microphone with connector and I supply the cord and pay for return shipping. I have a couple of cables in stock now and am ordering a few more just in case. If you would like for me to do this repair for you, you can click here! If you prefer not to use ebay then that’s fine too. I just thought it would be easier for some folks. You can always e-mail me at “MyCall”@arrl.net.***

I’ve had my HTX-252 since they first came out and it’s been a great little radio. The only problem I’ve ever had with it was the cord itself. The rubber coating on the cord dry rotted from years of sitting in the truck. Apparently this is a very common issue with the cords that they used for this radio. Worst of all, is that you can’t even program the radio without the microphone. I had to replace the microphone cable if I wanted to continue to use the radio. I didn’t find much info on the Internet as to what the connections were so I just dove into it and figured it out as I went along. This may not have been the best way to accomplish this task, but it worked for me.

Here are a few images of what the cord looked like after years of dry rot. 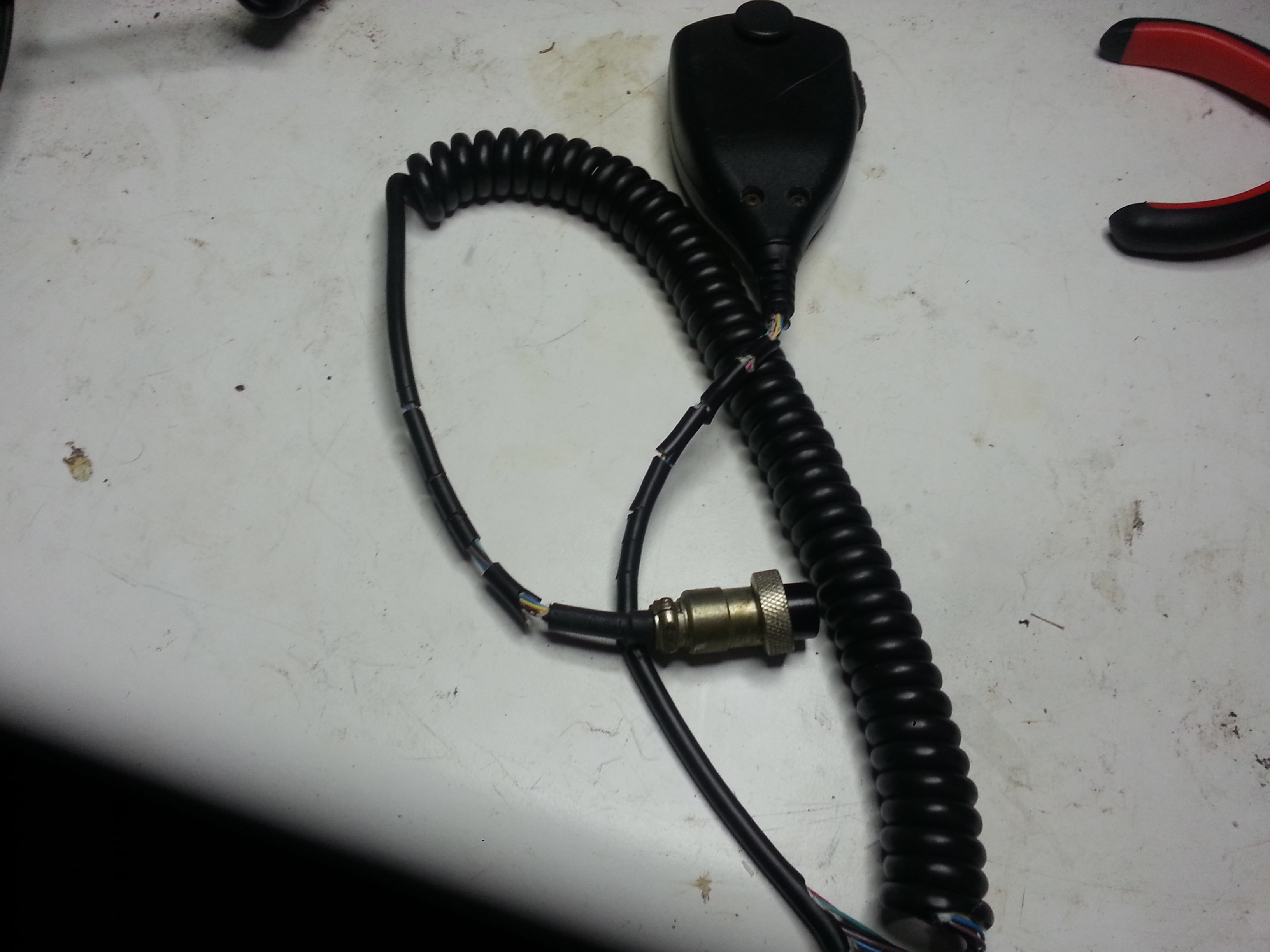 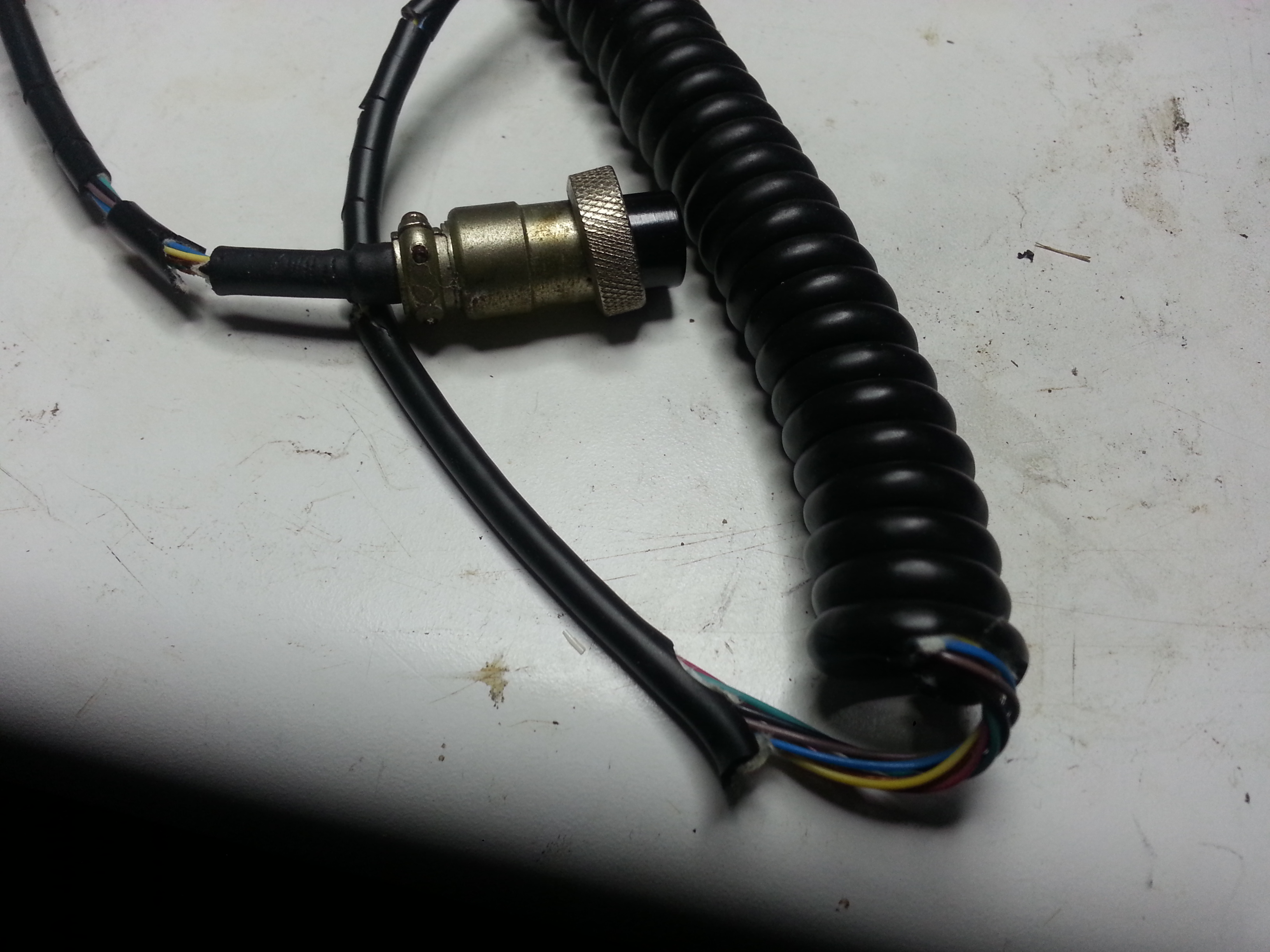 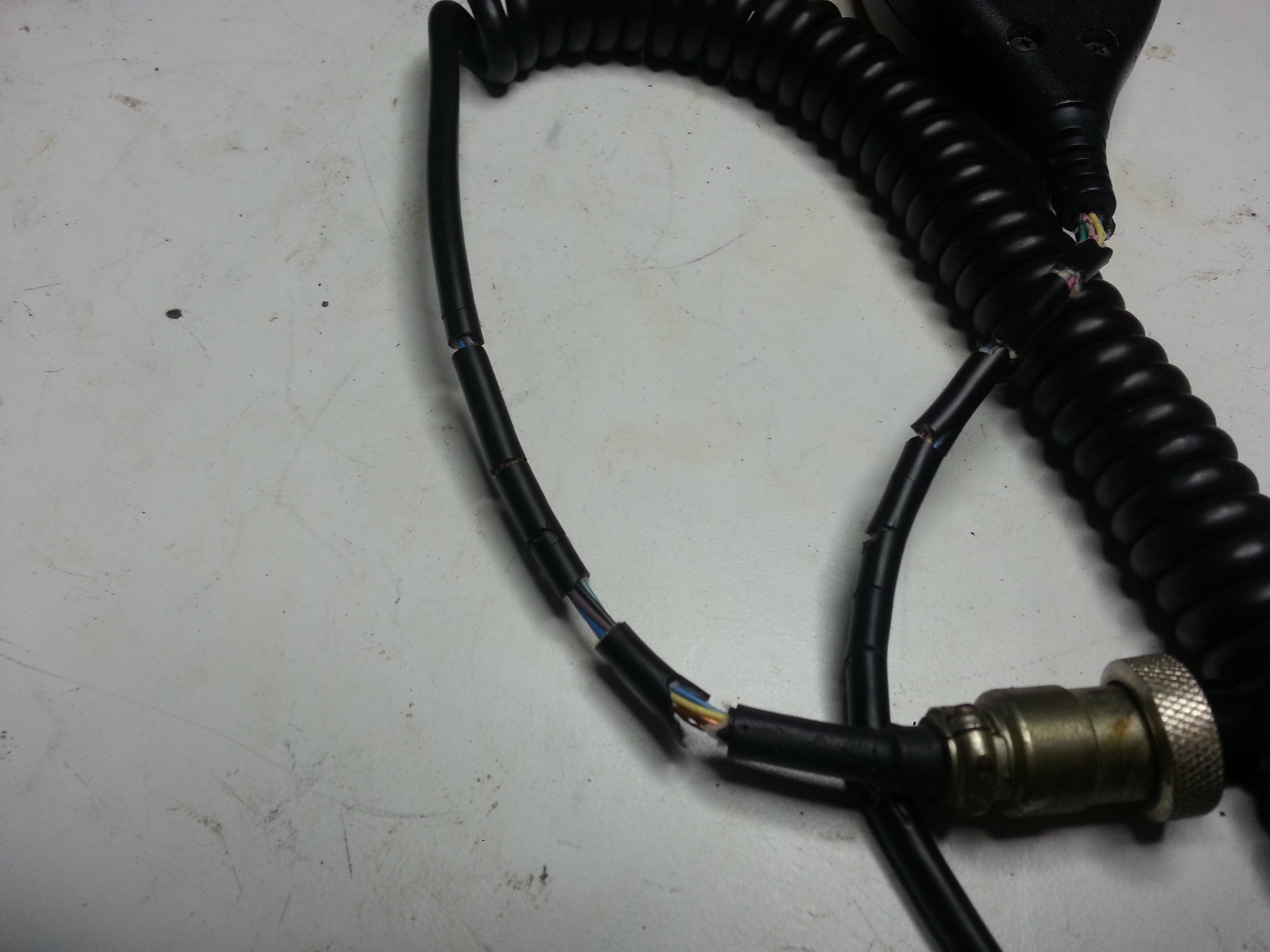 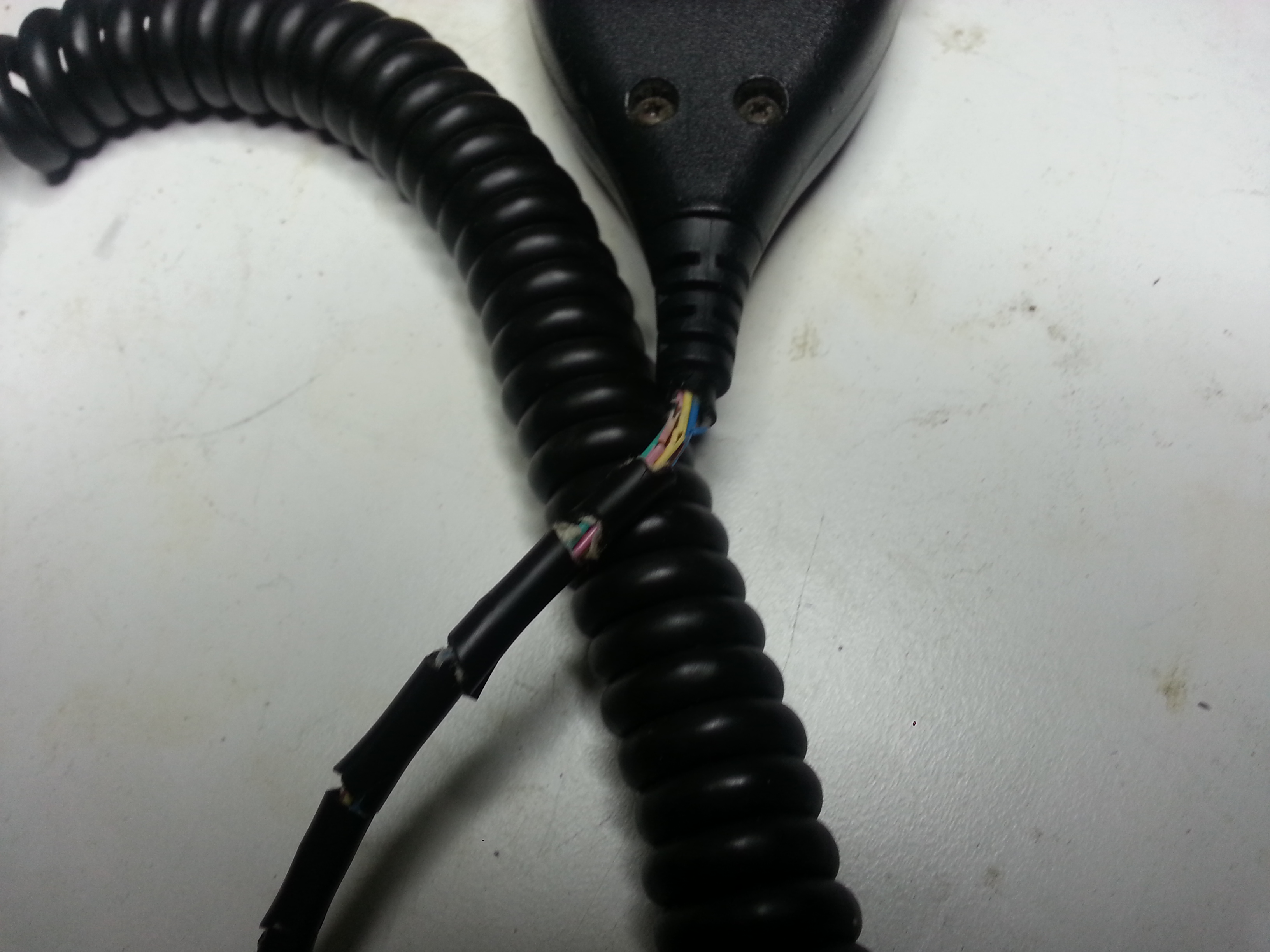 You can see how the rubber broke in segments and caused added stress to the conductors inside. Believe it or not, but the microphone was still working at the time.

I opened the microphone up and determined that I needed an 8 conductor cable (7 conductors + shield ) for the replacement. I looked online and found plenty of them but they were all standard thickness which was a bit thicker than the stock cable. I settled for this one

which can be purchased on ebay

for around 15 bucks and free shipping.

This is what the microphone looks like on the inside. Luckily all of the conductors get soldered right next to each other. Hold on to the yellow sleeves that go over the Shield. There is one in the microphone and one in the connector. Mine were yellow, yours might not be. 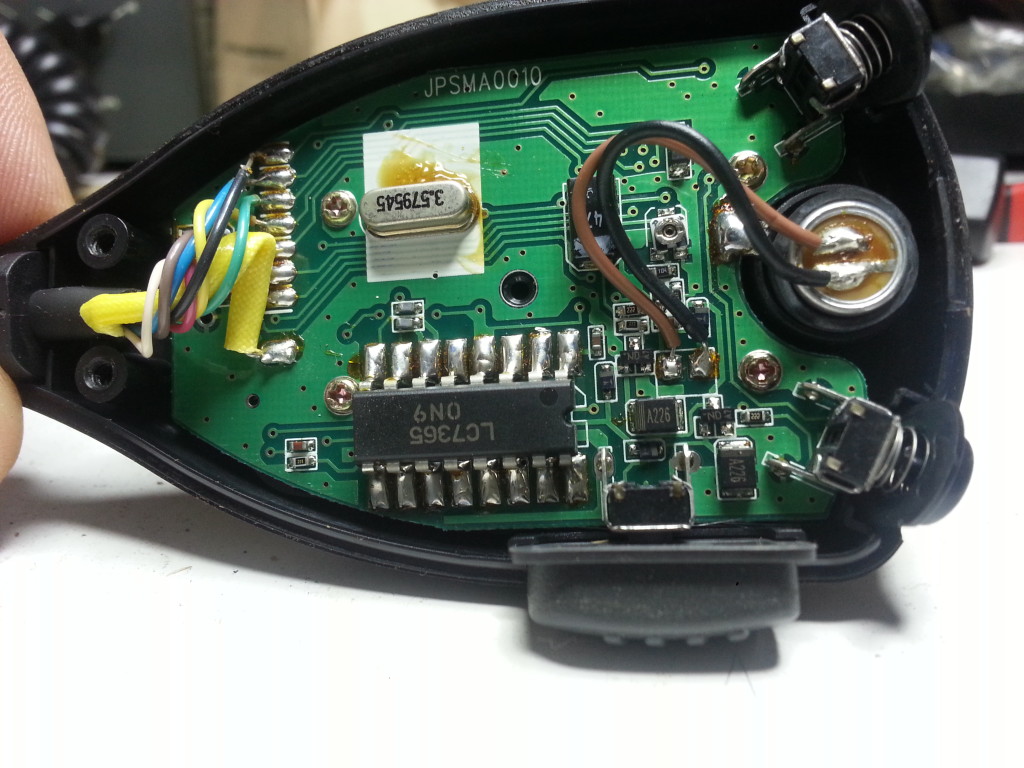 The conductor colors almost match up exactly to the existing cable with the exception of Green. The new cable didn’t have green, it had Pink. So I just used the Pink in place of Green. No big deal.

The toughest part of this whole ordeal was reusing the stress relief on the microphone itself. It will slip off of the old cable without any problem but getting it to fit the new thicker cable takes a little work. Here’s a pic of the stress relief removed from the cable. 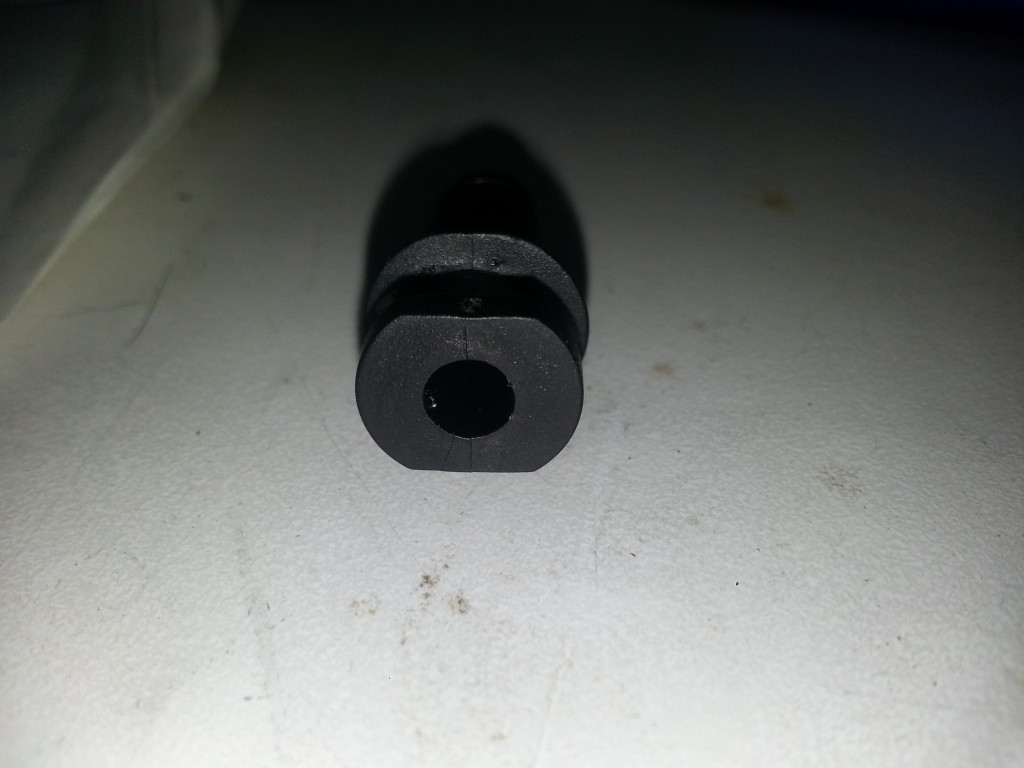 I ended up having to shave down some of the rubber and use a little dish soap to get it to fit but afterwards it looked like this. My first thought was to just drill out the stress relief to make it fit but after closer inspection, the outer walls of the stress relief aren’t very thick and I was afraid of it ripping off due to the torque of the drill. May or may not be the case but drill at your own risk. Here’s a shot of the shaved down end of the cable. I shaved down just far enough that you wouldn’t be able to see it once the stress relief was put back on the end of the cable. 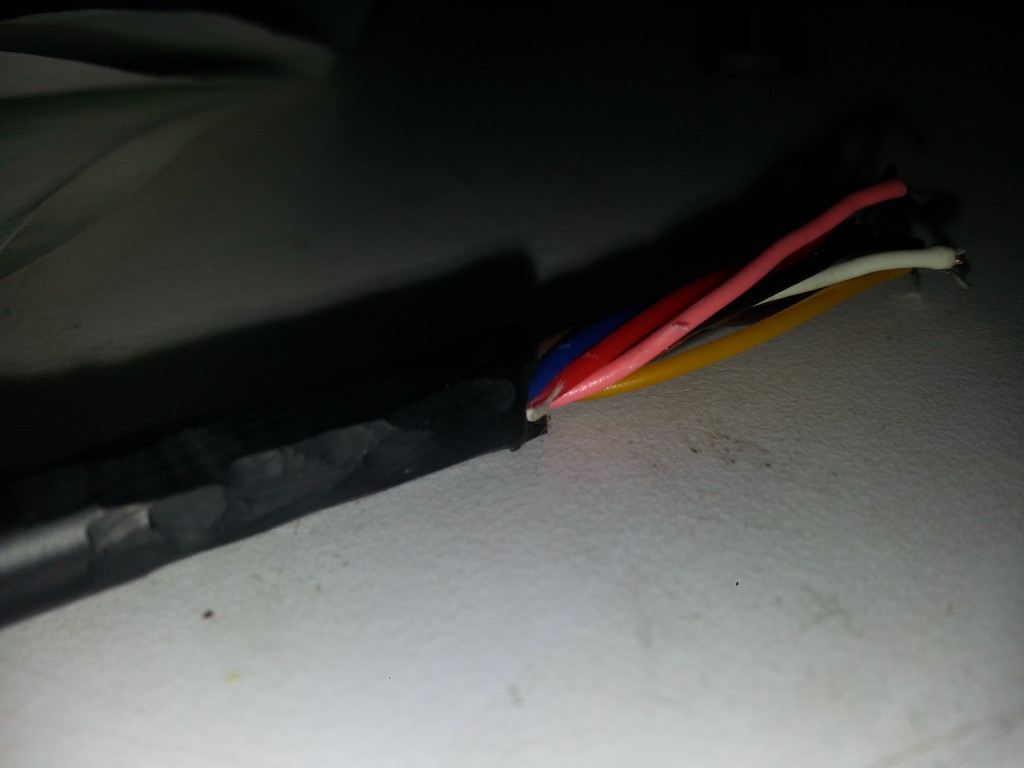 Here is a pic showing the microphone cord slid through to the end of the stress relief. 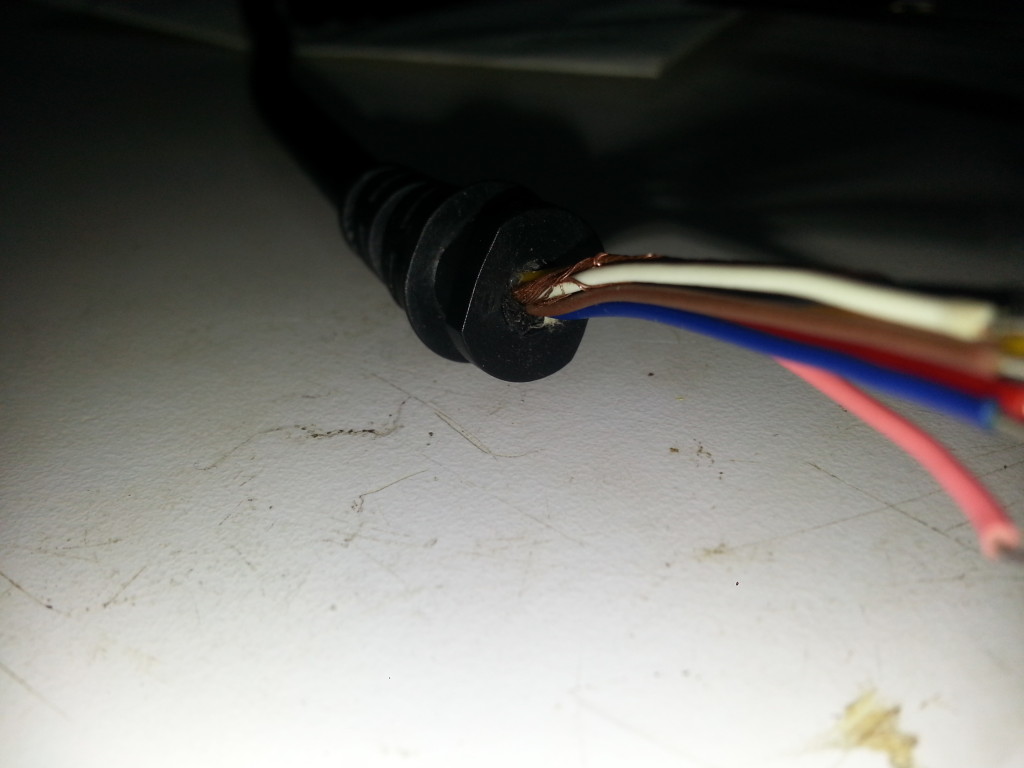 And this pic just shows that you can’t really see where I trimmed the rubber from the tip of the cable to make it fit inside of the stress relief. 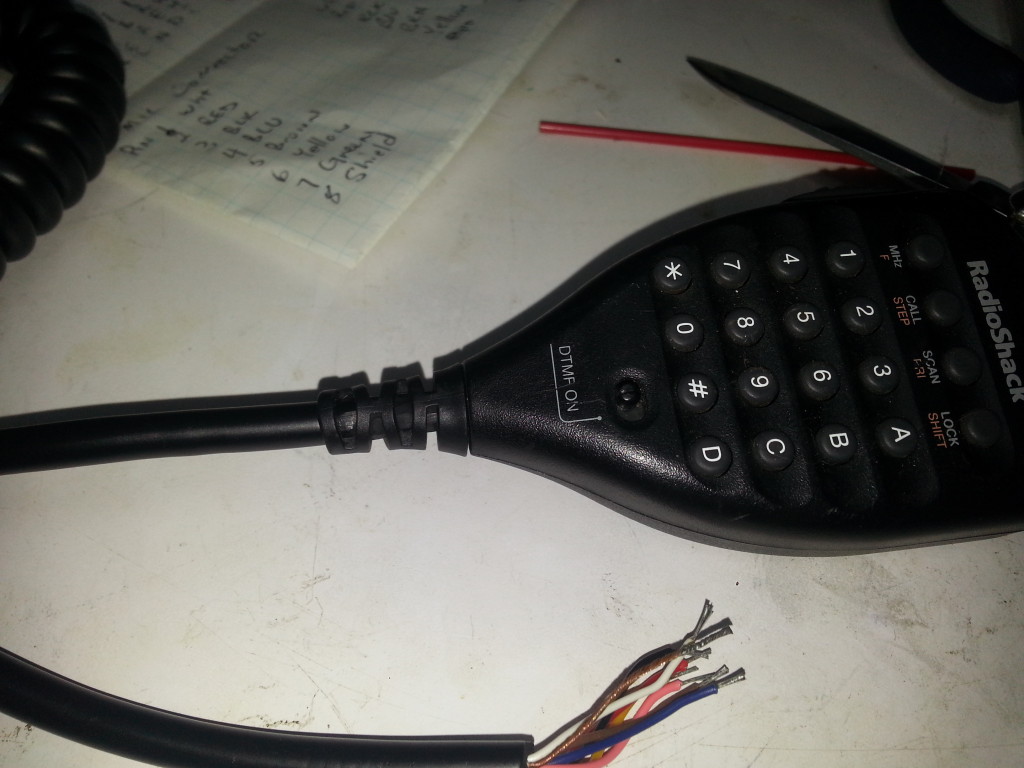 As I mentioned before, the color code is a close match with all conductors except for the lack of a Green conductor in the case of this particular cable so here is how my pinout ended up being on the microphone connector itself.

Here is a magnified pic of the microphone’s solder pads and I numbered them according to the pin-out of the mic connector itself. This is where the soldering gets tricky. If you can’t see any part of those white lines in between the pads when you’re done soldering, you’ve got yourself a bridge and something isn’t going to work right. 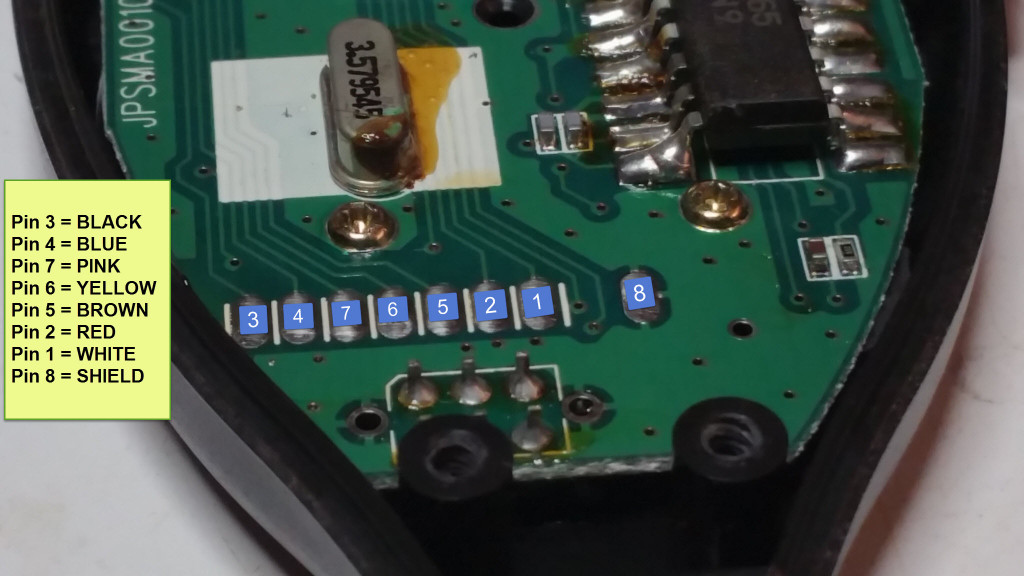 When all was said and done, she’s a brand new microphone and my HTX-252 is as good as new! Now I just have to stretch out that cable a bit because it’s still really stiff! 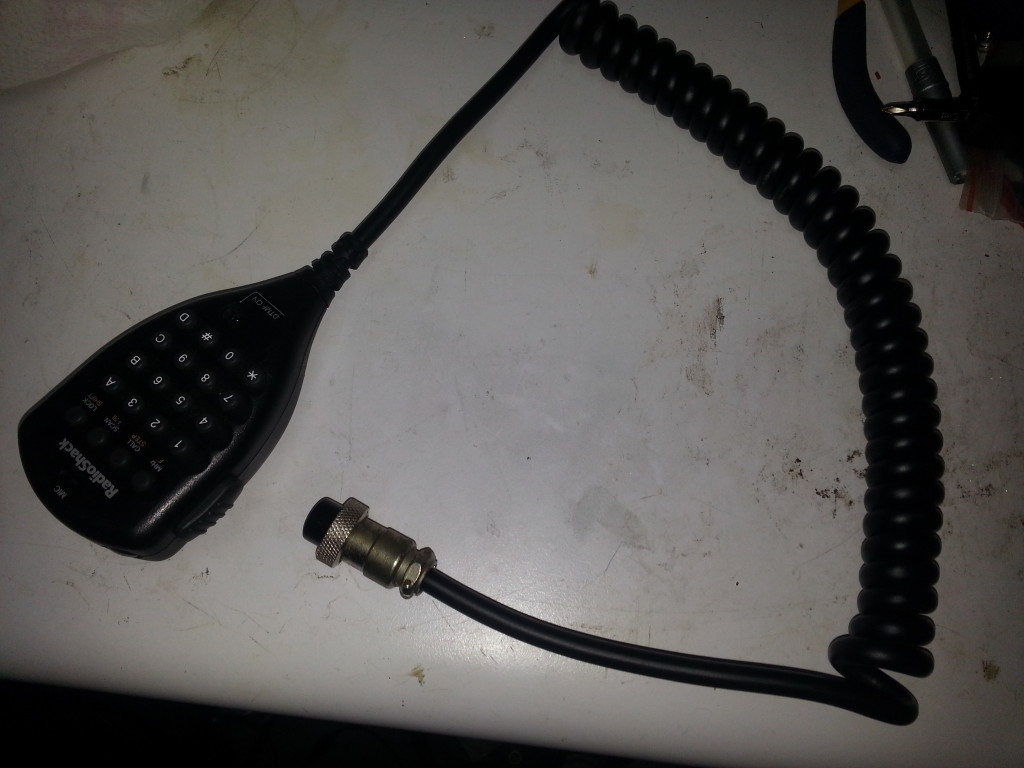 Overall, it wasn’t a very difficult job to complete and only took about an hour or so to complete and that’s with stopping to take pics through various stages of the repair. If you need to to this repair, one of the things to consider is that you will need a fine tip soldering iron because the pads on the PCB are kind of close and it would be easy to accidentally bridge them if you’re not careful. If you need help, contact me and I’ll get back with you asap.

If you need this repair done but don’t want to mess with it, contact me and I can do it for you!

Update 7/31/2015: Since I wrote this article last Spring, I’ve receive a couple of emails asking which soldering iron I used, what tip, what temp, etc.. I used just a one of the Radio Shack Digital Soldering Stations that I have had for a long time. There have been a bunch of them showing up on Ebay thanks to them closing hundreds of RS stores and clearing them out. You can click here

to see what’s available on there right now and for how much.

As far as the tips go, I used these

and just picked the one that was the closest width to the solder pads in the microphone itself. They fit perfectly in the Radio Shack station that I have.

As far as the temperature is concerned, just go with what you feel is right. If you have a super hot iron, then just hold it there for a second while you give the wire a tug or use a solder sucker like one of these

. I also recommend using a flux

to help in flowing the solder. The liquid is a lot easier to get where you want it compared to the paste that sticks to everything! Just my opinion though, try it out for yourself!

Update 10/2/2015:
Well it’s been a few months since I started offering the service to replace the mic cords for others and I have completed almost 20 of them so far! I just wanted to say that I appreciate the kind words that you all have been sending me after receiving your newly refurbished microphones. I do this not only for fun, because it really is to me, but it’s great knowing that without someone out here doing it, some of you would basically lose the functionality and probably the use of your perfectly good radio! Heck, even if you’re considering selling your old HTX-252 you know you will get more for it if it has a nice clean long lasting mic, right???

So I wanted to share some of the comments I have received in the emails from after the mic owners received and tested out their newly refurbished microphones. I’m not posting any identifying info with these because I really haven’t asked for permission.

“Thank you so much Steve! I was beginning to think I had lost that little mic. I love that radio! You have been a real Blessing, my friend…..I won’t forget it.”

“Steve it worked great. The service you provide, gives an otherwise junk radio new life.
I had considered trying to fix it myself, even if I could have found a suitable cord, I doubt I could see well enough anymore to do it. Thanks again. If I run across others with the same problem I will certainly refer them to you.”

There are many others but these were the few that I knew which e-mails they were in so they were easy to find! Thanks a bunch guys and enjoy your “new” mics!

BTW, I currently have 2 lonely 6′ cords hanging up on my wall if anyone is interested in giving their HTX-252 a new life as one of the comments says above!

I just wanted to share some of the EBay feedback that I have received on these repairs. Thanks Again! 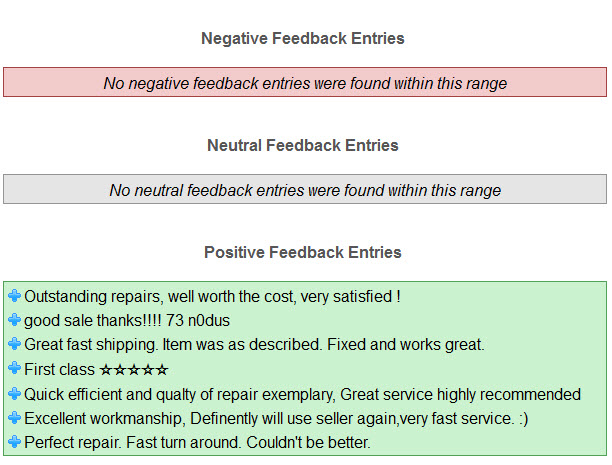